Distinguishing Features of the Report

The Report specifically highlights geographical, social, economic and institutional diversities of the state and their implications on aggregate human development outcomes. The report emphasises on geo-spatial diversities of the state which are not only unique but indeed enormous. The state shares large international as well as inter-state boundaries, accommodates both plains and hills, suffers from recurring floods and erosion, and has substantial riverine areas known as ‘chars’ and large tea gardens. More often than not these geo-spatial diversities overlap with one another. Besides, the state is a unique store house of demographic diversities with uniquely rich and diverse social norms and customs. There are interesting institutional diversities in the state as well – ranging from autonomous councils to development councils. These wide varieties of institutional arrangements have resulted from political processes of fulfilling various demands for autonomy and self-governance by different communities. The Report, therefore, highlights that relative advantages of people differ greatly in the state and, as such, differential achievements of people need to be understood in terms of these diversities. The Report, therefore, has been titled as Managing Diversities, Achieving Human Development.

Another salient aspect of the Report is that it is based on primary data. This is, in fact, the largest survey ever conducted in the state for development evaluation. The sample size of the survey is about ten times larger than the size of sample of typical NSSO rounds and about eight times more than that of the National Family Health Survey (NFHS) in the state. As such, the report provides some estimates related to child nutrition, health and educational attainment at state and sub-state levels for the first time. Secondly, this allows the report to adopt UNDP’s new (2010) method of assessing human development. This is the first time that a human development report is prepared with new UNDP method in the country.

Another distinguishing feature of the report comes from its analytical innovation. The report provides three supplementary indices related to employment-livelihood, vulnerability and subjective well-being. While the first two offer additional information regarding opportunities of making choices the third is concerned about the processes involved in realising the opportunities. Having an index of subjective well-being in the HDR, therefore, adds value to the analyses. This kind of juxtaposition of ‘objective’ and ‘subjective’ aspects of well-being within the capability approach is an important innovation attempted at in this report. Besides, the collaborative and participative approach involved in the preparation of the Report itself is a hallmark.

It may, further, be observed that achievements in all three key dimensions of human development viz. education, health and income are about halfway with education being at about two-third followed by health and income which are just at the half of the desired level. Besides, district-wise and various diversities wise both overall and dimensional achievements have shown wide variations. The district ranking based on the values of overall human development index puts Kamrup Metro at the top (with a value of HDI 0.703) followed by Jorhat (HDI 0.655). The lowest value of the human development index is obtained for the district of Hailakandi (HDI 0.437).

Most importantly, drivers of the human development achievements found to differ greatly across the districts. While the overall level of human development achievement in some districts like Kamrup Metro primarily driven by achievements in the income dimension, in case of others these have been found to be either education (say in Sibsagar) or health (say in Kamrup). This clearly points to the policy focuses for district planning and favours a decentralised, differentiated and need based development planning in the state.

The Report categorically underlines and stresses on redressing various inequalities for improving human development outcome in the state. It is estimated that about one-third (i.e. 30 percent) of the potential aggregate human development is lost due to the prevailing inequalities underlying in achievements in education, health and income dimension. The loss due to inequality is the highest in income dimension (about 44 percent) followed by health (32 percent) and then by education (9 percent). Moreover, it could be found that, district wise, dimensional inequalities vary distinctly.

The Report discloses that about one-third of the population in the state are ‘multidimensionally poor’ i.e. poor in more than one dimension of human development. The Report, therefore, emphasises on addressing poverty beyond income poverty within a much wider framework and approach.

The Report brings out an index of subjective-wellbeing of the people which represents how people value the various critical processes of human development. It is found that 56.4 percent of people are ‘satisfied’ – either moderately or intensely – with the most critical processes of well-being. However, great deal of variations exists in the proportions of ‘satisfied’ people across districts. The highest percentage of people ‘satisfied’ is obtained in Jorhat (82.4 percent) while the lowest is found in Marigaon (18.1 percent). The main drivers of ‘satisfaction’ have been aspects related to ecology and environment, cultural and psychological domains whereas the three main drivers of ‘dissatisfaction’ have been governance, education and health domains.

The Report emphasises on the multidimensional nature of poverty and deprivations. It, therefore, advocates for ending all types and forms of deprivations in order to improve human development outcomes.

In this context, the Report underscores criticality of education for overall human development in the state. The Report clearly emphasises on making children stay longer in school along with qualitative improvement in education. The Report observes that reducing the dropout rates at all levels is extremely important.

In the health front, the Report highlights, inter alia, four issues and concerns. It reiterates the need to accelerate the progress in improving the scenario of infant and maternal mortality. However, in this connection the Report observes that in the context of infant mortality social determinants and behavioural aspects are to be brought within the policy focus. Similarly, the Report observes that maternal mortality, perhaps, cannot be addressed only by focusing on institutional factors and policy must accommodate a range of non-institutional factors. The Report very clearly raises concern on child nutrition scenario in the state. The Report estimates 37.4 percent children within the age of 5 years are under weight. The most of the underweight children are in the age less than 2 years and lives in rural areas. gied. The Report observes that this is a serious concern implicating a host of cross-cutting issues related to reproductive and child health, education and employment and gender inequality.

The Report indicates that economic growth needs to be translated into greater human development outcomes and achievements for improving the lives of people. In doing so understanding and managing the various diversities in the state is extremely critical. Three things – as the Report argues – are significant in achieving better human development outcomes viz. gainful employment, quality and universal education and quality and universal healthcare in making the economic growth inclusive and broad-based. Sustaining human development, again, needs to be ensured not only by negotiating the environmental externalities but also by redressing all types and forms of deprivations and inequalities. In fact, the Report underlines that redressing inequalities is fundamental in achieving human development and making it inclusive as well as sustainable. The report makes an important value addition by considering ‘processes’ along with the ‘outcomes’ and emphasises the point that processes are critical to outcome. The Report, therefore, makes a very strong case for getting the processes right by underlining the principles of transparency, accountability and democratisation in the state. The report, in this connection, makes a strong case for inclusive institutions ensuring peoples’ participation in different processes involved.

The overarching broad massage of the report is that given the multi-layered and multi-faceted complexities emanating out of unique diversities of the state no generic set of policies would be able to bring about overall human development; rather there is a need for focussed and specific set of policies to deal with the issues and concerns raised in the Report and achieving higher level of human development in the state. 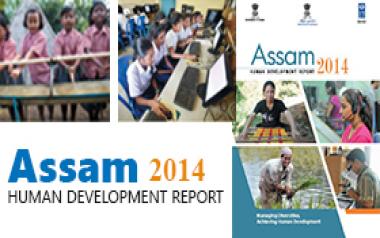